“I think we should take a team from Khayelitsha to the World Cup,” Gary said to Foundation Head Coach Sivu Mfunelwa while they put young Khayelitsha players through their paces on a January afternoon at Impendulo Primary School.

At first, it seemed like an impossible dream, but after months of passport, birth certificate and Visa applications, fundraising, kit sourcing and branding and logistical planning, the GK Foundation World Cup Tour finally came to fruition on 14 June 2019.

Players, parents and staff arrived at Impendulo Primary School at 9am, where the squad received an incredible sendoff from the community. Cape Town International Airport was filled with song and dance as the team embarked on an this exciting journey, a first for a youth township team from South Africa.

After a flight to OR Tambo, with a quick stop off and meal at Spur, (who were one of the main sponsors for the tour and a great supporter of work!), we checked into our Virgin Airways Flight.

Wide-eyed players were welcomed into the cockpit to meet the captain and then shown to their seats, where they quickly discovered the incredible tv, movie and games selection as well as the great food and drink offered on the flight which was a precursor to so many ‘firsts’ on this trip

We landed early on Saturday morning and met our bus driver, Jim, who took us on our first of many journeys, this time from Heathrow to Cardiff. After the excitement of the farewell and flight, an exhausted but exhilarated squad made our way to Sofia Gardens to watch SA vs Afghanistan.

We got our first taste of the English ‘Summer’ with some rain delays but cheered South Africa towards a dominant victory and headed back to the hotel to get a good night’s rest before our first game the next day. 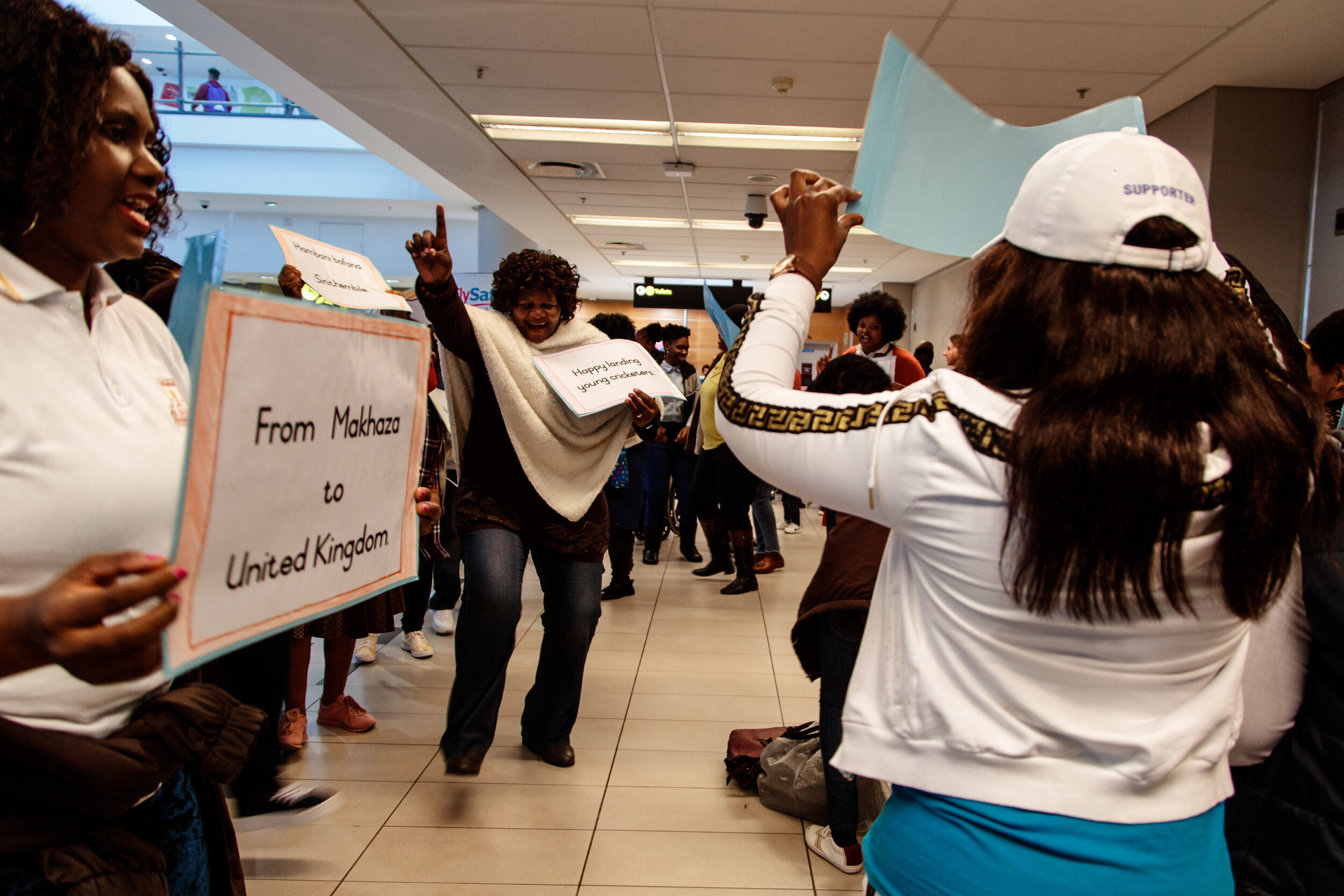 St Fagans is a beautiful countryside village, and it was the perfect start to our playing tour in incredible surroundings. Our boys showed their skills with a great win, and during some rain delays all the boys played together, with the language barrier being no match for the power of sport in making new friends across the world!

After the game we headed to Nandos for a well deserved victory meal, the first of many trips to Nandos where the team there treated our boys like heroes and saved us crucial pounds along the way.

The next morning, we travelled from Cardiff to Oxford and arrived at Magdalene College School, a truly special place with facilities unlike anything these boys had ever seen, never mind being lucky enough to play on!

Under the Church steeples and along the river, we played a great match against a very good MCS team. We found ourselves 4 wickets down early, but thanks to captain Nande Mguye and his 75 not out we dug ourselves out of a hole to post a competitive 123 after 25 overs.

MCS looked to be cruising to the total, but our teams character shone through, with tight bowling and superb fielding taking the game into the last over. MCS required just two runs to win, but Unathi Magoloza stepped up to bowl an incredible over with no runs off the first 5 balls! They needed two runs to win off the last ball and scampered through for a single, meaning the game ended in a tie! What a game!

A barbeque followed and the next morning we toured the beautiful town full of history, churches and University halls. In the afternoon we moved north to Birmingham, where we visited Edgbaston on Tuesday afternoon to meet their heroes, their smiles tell the whole story!

The next day we watched them in action at Edgbaston! Although South Africa didn’t get the result we wanted, it was an exciting game and our Gwijo Squad certainly made an impression on the crowd.

And we even got ourselves on TV!

From Birmingham we travelled to the lovely town of Weybridge in Surrey. We visited St Georges College School and the kids got to sit in on some classes and meet children from the school. It was a great experience for them to see what life is like across the world and meet new friends along the way.

The conditions were also something new for the boys to contend with, and they struggled a bit with the slow pitch and suffered their first lost on tour. Great lessons were learnt as very few of the boys had played on a real turf wicket before the tour.

That night we held a very successful fundraiser at an Indian restaurant in Weybridge, with Gary joined by Jacques Kallis, Bob Skinstad and Matthew Pearce in a wonderful evening where thousands of pounds were raised in aid of the Foundation. Thanks to Bob for the organisation and bringing together the Weybridge business community to support us!

The local community again supported us in their numbers the following evening for our game against Weybridge Cricket Club, with a crowd  over 200 people flocking to the ground to watch the match.

After a morning at Brooklands Motor and Aeroplane Museum, the boys practiced hard all afternoon so they could learn from their previous days loss and be prepared to perform in front of a big crowd, which none of them had even done before!

And perform they did! In an incredible team performance, the team put together by far their most impressive game of the Tour and the crowd could barely believe that a team coming from such humble backgrounds could play so incredibly well. Some tight bowling and faultless fielding was followed by superb shot-making by several players, resulting in a fantastic win! The players soaked in the appreciation with a lap of honour in front of a very appreciative crowd. What a way to end off our games and a massive thanks to Weybridge for coming out in force to make it such a thrilling occasion for us.

A happy team got on the Bus the next day for their last leg of the tour, and could celebrate their victory in style at Chessington World of Adventures.

What an experience for these boys! Rollercoasters, water rides and Bumper Cars were a real hit! This was something that they would never get to experience in their normal lives and many commented that is was their favourite thing about the entire trip.

Once we managed to drag the boys out of their Theme Park heaven, we continued onto London and then the Home of Cricket, Lords. A real bucket list moment for these cricket mad kids!

We got experience the noise and excitement of the Pakistani supporters first hand, which made the day plenty of fun despite the loss for South Africa.

The final day was full of London sightseeing – Trafalgar Square, Buckingham Palace (including the changing of the guard), a boat ride on the Thames and the Natural History museum. It was great to be tourists in such a breathtaking city!

From there it was time to head home, with players and management exhausted from so much travel, activities and excitement over the 10 days. It was a trip that will be never be forgotten by everyone who was lucky enough to join, and will hopefully be the first of many for the Foundation.

So many people and organisations were involved in making this happen on every step of the journey, and the GK Foundation can’t thank all these supporters enough for making this trip of a lifetime a reality.